My top event in 2015 has started. I arrived this morning at 7AM in Leh. Leh is the biggest city in Ladakh with around 30000 people and the place to be if you want to travel in the Karakorum Range. It’s a huge tourist hub during the 3 month season. It is also called little Tibet because of the religion and the culture. Easy to see the influence of the Tibetan Buddhism everywhere. 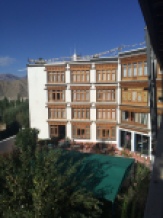 After the check-in to the Oriental Guesthouse I made my first steps in this new territory. Because Leh is on 3500m alt. the first day should be a very very easy day. No long walks, a lot of water and many rest on the first one or two days, these are the words and recommendations from all the friendly people around here. 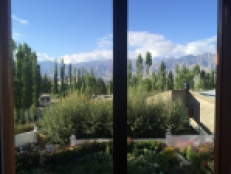 Unfortunately just 200m away from my guesthouse is the start of a 130m high stone stairs up to the top of a hill with a nice Stupa (a praying and worshiping building). These kind of stairs are like a magnet, so I had no chance and just 3 hours after I arrived here, my acclimatization started with a powerful climb on these stairs. Breathless, but fine. 🙂

Back at the guesthouse I started the rest as people told me to do. Well, it’s not easy to have a rest when you’re restless and wild. 🙂 A few minutes later I found myself dressed in compression clothes and off I went.

I had a slow run through the northern suburbs and after 7km I found a way to the Khardungla road. I followed the road up to 3780m, and then I turned back. At the end I had 17.5km on the clock. The guesthouse manager was not happy with me when I came back to see Mei was running for several hours. She complained a lot because she just wants the best to her guests, but I had a happy day and I still feel fine.

8 years ago I was in Tibet on the same altitude but as a different person. Some proper walks in Lhasa with a fat body, smoking like a chimney and drinking like a fish was not possible and I felt deader as alive. But today I felt I could continue running to the top of Khardungla, but I only had a liter of water so I had to turn around.

Great day at all which I finished with a dinner from the vegetarian dinner buffet in the guesthouse. Me as a meat lover was very skeptical, but if I could get this Indian veggie food every day I would not touch anymore meat. At least the next 10 days I will not miss any sausage or steak. The food is really amazing here. Love it so much.